Eye of the Spirits A

Wisdom of the Demon God A

"Question: What cannot be exchanged for Money? That would be time spent between me and you. (...) It is something that cannot be stolen from you, a True Treasure."

The Caster of Midrash brings the Art(s) of the Deal and enigmatic charm to those experiencing the State of NA (specifically Salem, Massachusetts).  By providing teamwide offensive support and Single Target Arts DPS value at a 4* Rarity, this Coquettish Capitalist Caster will be sure to profit Arts Teams!

Caster of Midrash's excellent return on investments comes from her efficiency in buying and selling buffs in Arts teams.  Her extremely rare Single Target Arts NP and excellent NP gain gives her strong refund potential on NP-A-A chains with Arts Support.  Wisdom of the Demon God stands out as a strong team wide Buster and Arts buff that provides even more kickbacks to team NP gain as well.  Eye of the Spirits allows Mid-Caster to capitalize on crits with an Ignore Invincibility bonus, compounding with her BBAAQ deck to offset the 0.9x Caster Damage tax.  With these tools, she shines as a mixed DPS/Support on Arts Teams.

However, the Midrash Mirage does have a few flaws that sell her short.  Her lack of NP Charge or Critical Star Gathering means she has very little on-demand damage potential on her own, while her Critical Buff's one turn duration hurts her bottom line damage.  This makes her harder to recommend for farming quests. During challenge quests however, Mid-Caster will require bailouts from defensive supports to survive bosses since her skills are all invested in offense.

As a  whole, Caster of Midrash is a Damage Dealer with a rare ST Arts NP and multiple teamwide buffs.  She excels in Arts teams with dedicated supports to provide a steady stream of damage through NPs or Arts Crits.  Despite her lack of farming ability, like her favored camels Mid-Caster is a consistent team member who can power through long treks against bosses.

.81% NP gain per hit and 3 hits on Arts propels Caster of Midrash's NP gain above and beyond the norm.  A combination of her passive Territory Creation, Arts Buffs, and the nature of having an Arts NP allows her easy access to complete refund potential on an NP-A-A chain through a critical hit or some Overkill.  With proper support and cards Mid-Caster can spam her NP and become the anchor DPS for an Arts Team.

Caster of Midrash's Attack up and Buster/Arts Performance Up last for three turns, boosting the team's damage and NP gain with high uptime.  Additionally, with Midrash Caster's NP spam potential the enemy will usually be debuffed by her Defense Down and Attack Down as well, further providing stacking support for the team.

As a Caster with a BBAAQ deck and a critical buff, Caster of Midrash is able to take advantage of critical hits to either deal better damage with her Buster cards or gain ridiculous amount of NP gauge through Arts cards.

Unlike some of her fellow offensive Casters, Caster of Midrash has no NP Charge or Star Gathering skills, resulting in a lack of on-demand burst.  This makes her rather unsuited for farming, where quick AoE burst is typically preferred.

Although Caster's kit is simple yet effective, it has the downside of being completely offensive with only her Attack Down on NP providing any form of survivability.  While this isn't a major problem given proper support, it will still require extra consideration for team building. This also limits Caster's participation in certain quests, as without alternative value like on-demand utility, she can only contribute her straightforward offense.

Despite her Critical potential, Midrash Caster suffers from every other critical Caster conundrum: low class star weight that only beats out Berserkers/Avengers.  The one-turn critical buff duration also hurts her critical consistency in a vacuum. Meanwhile, the .9x damage penalty on Casters solidifies her difficulty competing in the general DPS market against Knight Class or Berserker Servants.

Overall, Caster of Midrash hits hard as an offensive Caster, and her skill set supports it perfectly through damage/card performance buffs.  Thus, the ideal is to buff her consistent damage as much as possible while lowering their cooldowns for the greatest downtime. On the whole though, every skill will greatly benefit Mid-Caster's damage and should be leveled to maximize her potential.

Although Caster of Midrash can deal good damage through crits and her NP, focusing on NP with crits as a secondary is recommended due to her high NP gain and low Caster Star Weight. Arts Performance, NP Gain and NP Damage will help maximize Mid-Caster's NP strengths. Starting NP is a bit more niche but can be useful for a strategic early NP or dispatching a weak boss.  For teams with better access to consistent stars, Masters may want to consider Critical Star Absorption and Critical Damage. Do keep in mind Critical Damage is additive and thus may not be the best option at times 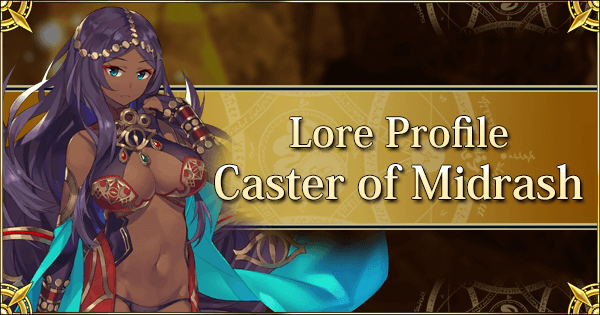