Becoming Light in the Abyss A

Hollow Tree Filled by A Remnant of Light

When equipped on Abigail Williams,
Increase own NP Strength by 30%.
Apply Instant Death Immune to self (3 times).

Behind the innocence and purity of a young maiden, Abigail Williams, or Abby, is unwittingly capable of bringing unspeakable horror unto the world. On the battlefield, this adorable girl of Salem shines as a single target anti-Berserker specialist with excellent challenge quest utility and team support.

Abby’s unique Foreigner class grants her complete advantage against Berserkers, allowing her to deal high damage against them and tank their hits easily. Her kit is full of effects that benefit the team, starting with Faithful Prayer granting everyone an NP Battery Effect and NP Damage steroid over 3 turns. Mass Hysteria further improves the team offense through its AoE Defense Down effect, accompanied by a powerful but unreliable “Terror” debuff. Additionally, Witch Trials rounds out her challenge quest capacity with a targetable NP Gauge Drain and Attack Down debuff. Finally, Abigail William’s Noble Phantasm -- Qliphoth Rhizome -- synergizes well with her identity thanks to its valuable buff removal effect before dealing damage and lowering her target’s Critical Chance. As she possesses three different damage boost modifiers from her skills and her passive, this Noble Phantasm deals good single target damage as well.

On the other side, it is tough to build an optimal team around Abigail, mainly due to her long cooldown times, poor base NP Generation and mismatched deck. All of Abby's skills have very high cooldowns, resulting in large downtime and awkward skill timing. This further ties into her second main issue, as when Faithful Prayer is not active, Abby struggles to generate enough NP gauge on her own to sustain her damage. Furthermore, Abby’s BAAAQ deck does not synergize with her Buster Noble Phantasm, which hampers her overall damage.

To summarize, Abigail has a strong and unique enough specialization in handling Berserker-centric quests, particularly lengthy ones. However, her fundamental downside means she is hard to use at her highest potential, especially for Masters with less developed rosters.

Being one of the elusive Foreigners, Abigail has a highly useful niche in countering Berserkers. Berserker enemies and bosses, in general, are highly common, making Abby a safe Servant to bring for such content for most Masters.

Abby brings several forms of team support with her ability, including the coveted teamwide NP Battery effect in Faithful Prayer, albeit spread over multiple turns instead of instantaneous. Through the form of NP Damage buff, Defense debuff, Attack debuff, and Critical Chance debuff, Abby can raise the entire team’s offensive and defensive capacity.

Abby has a lot of interesting tools that make her quite versatile to counter challenge quest gimmicks. NP Drain from Witch Trials is universally useful in high difficulty challenge to manage a boss’s NP Gauge, while the buff removal effect from Abigail’s Noble Phantasm is a godsend against bosses that can stack a lot of removable buffs. Last but not least, while reliant on RNG, the Terror debuff can help buy time and increase survivability, especially against a wave of many enemies.

Abigail is one of the uncommon Servants possessing all three different damage modifiers that can improve her Noble Phantasm, which are Faithful Prayer’s NP Damage Up effect, Mass Hysteria’s Defense Down and her passive skill Insane’s Buster Performance buff. When used with all these effects present, her Noble Phantasm can hit quite hard. As her Noble Phantasm also strips the target of all their buffs before dealing damage, it will not be mitigated through defensive buffs such as Defense Up, Dodge or Invulnerability, except in situations where those buffs are unremovable.

All of Abigail William's skills start at 9 base cooldown and go down to 7 at the max level, which is incredibly high compared to most Servants. As a result, they all have very limited uptime without skill cooldown reduction support. In lengthy battles, this might mean they will not be up in time to counteract bosses’ actions, or simply to sustain her damage output.

Despite having a triple Arts deck with high hit count on her Arts cards, Abby’s NP Generation is highly subpar, especially when Faithful Prayer is on cooldown. This is due to her inherent low NP generation per hit. Without Starting NP Gauge from teammates or Craft Essences, Abby will find it very difficult to utilize her Noble Phantasm often.

A BAAAQ deck with a Buster Noble Phantasm is an inherently inefficient combination. As a result, Abby will have trouble finding the right Support Servants to match her card deck. Her damage ceiling is also naturally lower due to the incapacity to perform an NP Buster Brave Chain.

Abby does not have any hard survival skills that allow her to survive a boss’s Noble Phantasm or a hard-hitting critical hit. As such, she will need support from teammates or Craft Essences to survive in the long run.

Due to her absurdly long cooldown times, it is highly beneficial to raise all of Abby’s skill levels just to reduce their downtime. She is not a particularly effective Servant in a generic line up, but she shines more when there are other Servants to mask their major flaws. Thus, for Masters with less developed roster, leaving her skills at level 6 is enough. Masters who lack a highly dedicated answer to Berserkers may consider raising all her skills to max levels.

Abigail excels in challenge quests, although her turn-based skills effect and long cooldown times create a contradictory emphasis in her playstyle. Thus her Craft Essence choice depends a lot on Masters’ playstyle. In any case, Starting NP Gauge is always a strong option given her lackluster NP Gain. While Buster Performance does not improve her normal cards’ damage greatly, it still benefits her Noble Phantasm. NP Damage UP and Attack Up are also strong means to raise her damage output. In practice, any hybrid Craft Essence that grants two or three of these stats is sufficient.

Foreigner is the only class in the game that takes reduced damage from Berserkers, while still maintaining a 2.0x damage bonus against them. On the other hand, they are at the mercy of Alter-Egos, both offensively and defensively. Interestingly, Foreigners also deal double damage against other Foreigners.

As a class, Foreigner has high Star Weight (Archer-level), a standard 1.0x damage modifier and Lancer-level Star Generation. Their unique passive skill - Entity of the Outer Realm grants them sizable Debuff Resistance and passive Star Generation. All in all, a fairly balanced and above average class container.

Abigail’s Terror debuff will have a chance to stun afflicted enemies every turn. The debuff will dispel once the enemy is stunned or when its duration runs out. Terror’s stun chance is NOT dependent on Debuff Resistance and Debuff Success Rate. 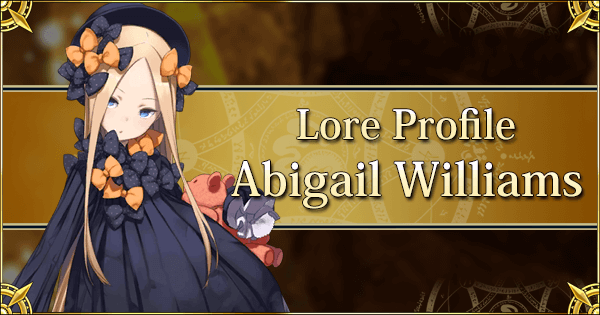