On this month's Roadmap, it was announced that we'd be getting the 2.09 client update, which brings some long-awaited features, such as Equipment Index, as well as other various QoL improvements.

While performance wise, it seems to be only marginally better than 2.08 (guess we'll have to wait for significant improvements on that front after CN gets client 3.00), starting a game is now easier than ever thanks to numerous improvements for beginners, including a free Parachute Fairy for everyone! 2.09 is also expected to fix the sound bug that plagues iOS clients, which was originally expected to be fixed by a 2.081 patch.

For the unlucky Shikikans, like me, who Carcano M91/38 avoids like the plague, we finally can acquire her through the Beginner's Anchor, which new and old Commanders can benefit from!

As announced in the Twitter, the client is expected to arrive at June 21st. Maintenance is expected to last a while, so remember to spend your energies and send your echelons on long Logistics!

With the update now officially live, there are a variety of bugs and notices that have appeared. When these are fixed, or updates are provided we will add them here.

First, the big one. There is no double yield on regular sims, only the SF Sims.

Double regular sim was implemented in the following week, so we expect further sim events to run as intended.

Second: At the moment, the training battle for the Parachute Fairy is bugged, and will simply load forever. We will update this page when this is fixed.

Parachute Fairy bug has been fixed

Third: AR-15 and SOPMOD have had their Special Equipment upgraded, however the Equipment card has not been.

A bug on IOS where sound breaks when switching apps has not been fixed.

IOS bug was fixed hours after the client went live.

Defense Fairy has not been updated to it's new state.

Facing an AI does not count for the Dailies in Luffberry Chess.

It seems that idling too long will make a message saying "Too much time has elapsed, you cannot gain gachapon tickets from this game." message. So it's possible to farm using AI, just not AFK farming.

Patched up with a minor in-game update.

Talent Reset on Fairies does not work, which is a shame

All sorting is reversed from its default (Ascending is now defaulted instead of Descending). This bug has appeared on foreign and was fixed. Why it made it to EN, we cannot say.

If you find other major issues, please let us know and we will update them here.

Additional changes not mentioned in patchnote

MICA has finally fixed the cursed popup box that appeared whenever fairies/T-Doll/equipment armory was full. It now has the option to buy slots, dismantle them or use them as fodder:

All filters now have an option to filter by unlocked/locked (that includes equipment, T-Dolls, enemies, Coalition Units, etc). Very very convenient to have when looking at who's keeping you from having 100% T-Doll index:

Fairy talent filters was added after all:

In equipment index, there are entries to equipment not yet obtainable as of 2.09 release (such as Ribeyrolles Mod SPEQ). It's unknown whether this is a bug, or intentional.

BigStupidJellyfish (BSJ) managed to gather enough data on Anchor pulls to be able to run a statistical test against gfdb data (on standard rolls, not the optimised ones) pre 2.09 release. The conclusion of this test was that the Anchor pulls does not offer an increase on 5-star produced over regular production.

Big thanks to BSJ for helping on that!

It's now possible to see whether you have collected or not Kalina hearts, for those looking at giving her TLC or getting the affection achievements. First of all: CAREER QUESTS ARE NOW RETROACTIVE.

Yes, that means old Commanders will get the new stuff without redoing everything from the start. Old stuff already acquired cannot be earned again though.

Keep in mind that this rework also means new players have to do all the quests to progress to the next tier, so no getting your Uzi or MP5 if you skip doing some tier 1 quest (will still unlock though)

This includes Fwee Pawa Faiwy, as well as the change to the standard Commander Outfit going to tier 2 meaning the recommended way to unlock this now becomes either Anime profile background or making sure to grab a background from a Seasonal Event.

Article on how to acquire Free Parachute will come up soon:tm:

Plus a pile of exams of various difficulties for each of these types (for example beginner, intermediate and final exams for Fairy use or Night Battles)

7-Day Login is also getting changed, with Commanders getting a heckin' lot more resources (including even Oath Rings and tokens available on cheap gem packages) than we used to.

For details, check this spreadsheet. One of the biggest changes (and arguably, something they should have done a long time ago), Combat Simulation will work significantly different from how it currently works.

Combat Sim will finally have a fixed amount of energy per day, of 12. Commanders no longer will need to log in twice a day to spend Combat Sim Energy.

The Combat Sim Energy is replenished to 12 every reset, so Commanders are highly recommended to spend them.

Moreover, Combat Sim is also taking a note from SF Sim: It no longer will rotate which sims are open, but rather will have all of them open everyday. However, unlike SF sim, they won't have rotating bonus.

Defense Drill is getting a significant rework:

EXP sim now grants CRs instead of Combat experience, now making it an actual viable choice for those who won't bother or lack time to Corpse Drag.

Once Commanders unlock HOCs, SCR variant of EXP Sim will also be unlocked.

These are the new rewards per Sim level:

Now in Combat Missions Commanders can read descriptions of the enemy units on the map. There is also a toggle to view the Skill information of an unit after long-clicking on it.

On KR client the Clear Conditions and Rank Conditions have been separated into two different tabs, making it more inconvenient for players. As there's no mention of this UI change in the Tweet, it's unsure if EN client will get this too.

However, given that there's little difference between foreign clients and EN ones, it's likely that we'll also get this.

A reset button was included (right next to the Retreat button). In tests with foreign client, it seems that this button also resets Fairy talent proc, which was something MICA removed from the game in a previous client update (resetting the client no longer reset talent proc).

You can change “slow down” when selecting a doll to “pause time”, this allows some very precise kiting.

Our lord and saviour, Ceia, has a tweet showcasing this: Pretty self explanatory for anyone acquainted with T-Doll Index, the Equipment Index is one of the long-awaited features in the game ever since T-Doll Index was first implemented.

It'll log every equipment Commanders have (normal and SPEQs) into the Index after 2.09 rolls out.

Do note that it'll only index equipment you already own, so don't scrap your SPEQs or other equipment before it!!!!!!!

Much like with T-Dolls, the cost to recover an equipment scales with rarity, although it's pretty cheap :

The Equipment Index also shows a bunch of new information on equipment, such as:

Apple has shown in their tweet images of those changes, linked below:

Fairies will now be finally able to be filtered by talent (Calib feeders appreciate this).

Also, not mentioned in the Tweet, 2.09 is also expected to bring the Defense Fairy rework we didn't get because of incompatibility with 2.08 client (or so they say)

For details on how Defense Fairy will change, check this article we did when Fairy Rework was originally announced, linked below Also rather self-explanatory, we can now individually select a background for each Adjutant T-Doll in the Adjutant tab.

Imagine not using Epiphyllum with everyone Starting 2.09, every Commander, new and old, will have a Starter's/Beginner's Anchor, from which they can select 2 T-Dolls to acquire from a restricted pool:

We highly recommend Commanders picking 416 and Carcano M91/38 "Grape", out of everyone, for the following reasons:

For the veteran folks, either pick a AK-15 and Grape dupe (cos AK-15 Mod is just as broken as Grape, so she's worth duping), or a Grape dupe and whoever you're missing (I have a hunch some will be missing P90, as she's a pain to acquire)

Or, you know, just dupe your waifus.

Rumour has that these Beginner Anchor rolls have an unusually high drop rate for 5 star T-Dolls, so Commanders are likely to get a good RF when rolling for Grape anyways, negating any benefit in rolling for Lee/WA2000. New rewards here, reward gain stacks up to a certain amount so you only have to do games once a week, against ai works, against friends works (afaik).

Season 1 only has the Z-62 skin, the other stuff is added in Season 2.

MICA has made a few updates to the UI to the HOC screen, including making it more obvious when you can We all been there: "wait, you can enhance HOCs?"

Mica made it more obvious now:

Below the plus sign it says "ENHANCE YOUR HOCs" 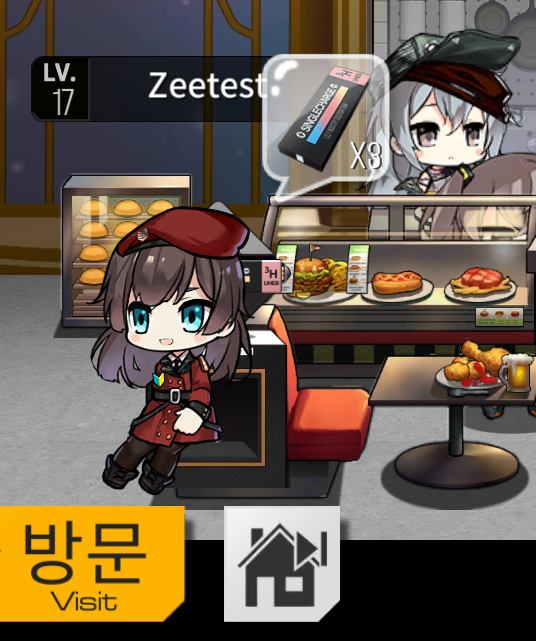 They also made many Ui changes, including:

Achievements of the same type will be collapsible, Achievements for content not yet unlocked (HOC, Coalition, Fairies) will be hidden.